In a small, English town runs a river with a dark past.

When Nel Abbott jumps to her death in the river, she leaves behind her teenage daughter. Nel’s sister, Jules, comes to take care of her, returning to a town she was desperate to run away from. But this isn’t the first person to turn up dead in the water. The river has claimed the lives of several women over the years, and most recently, a teenage girl. However, not everyone is mourning the death of Nel, who was writing a book about the river’s past and dredging up memories the town would rather put to rest. Was someone desperate enough to keep secrets hidden…that they pushed her? Or is there something more sinister in the water that draws these women in? 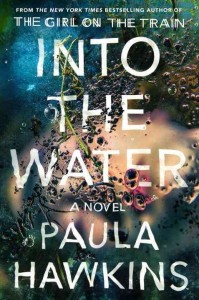 Told from multiple perspectives, Into the Water by Paula Hawkins, is a page-turning mystery where just about everyone has a motive. Hawkins has a talent for crafting a quietly eerie tale that keeps you wanting more. I really enjoyed her breakout book, The Girl on the Train, as well as the movie, so I knew I had to pick up her newest one. And honestly, I think this one is even better than her first.

Hawkins does an excellent job creating complex and believable narrators that fuel the story. It wasn’t hard to picture the people of this strange town and to understand their pain and motivations. Hawkins handled switching perspectives really well, giving each character a unique voice and insight that actually added to the plot, instead of confusing the reader. I’m not always a fan of multiple narrators, but I liked how Hawkins did it in this book.

I particularly liked reading from the perspective of the victim’s sister, Jules Abbot. Her flashbacks of growing up in the shadow of her perfect sister really pulled me in. It was interesting how Hawkins played with the idea of memory and that how we remember the past can be more significant than what actually happened.

If the characters don’t draw you in, the setting certainly does. The small town trying to ignore its own tragic past (which involves drowning accused witches) sets a creepy tone for the story. I liked how Hawkins includes excerpts from Nel Abbott’s unpublished book about the girls who died in the river. It really added to the idea of the river being a character in the story and kept me wondering what was behind these suicides.

Like her first novel, Hawkins’ writing is deeply engaging. While it’s not extremely fast-paced, the story definitely keeps moving. Much like the river that this book centers around, things appear calm on the surface, but there’s a lot going on underneath. Into the Wateris a quiet, yet deeply-satisfying book.

I would recommend this book for anyone who liked Girl on the Train, but also, for anyone looking for a well-written English mystery.